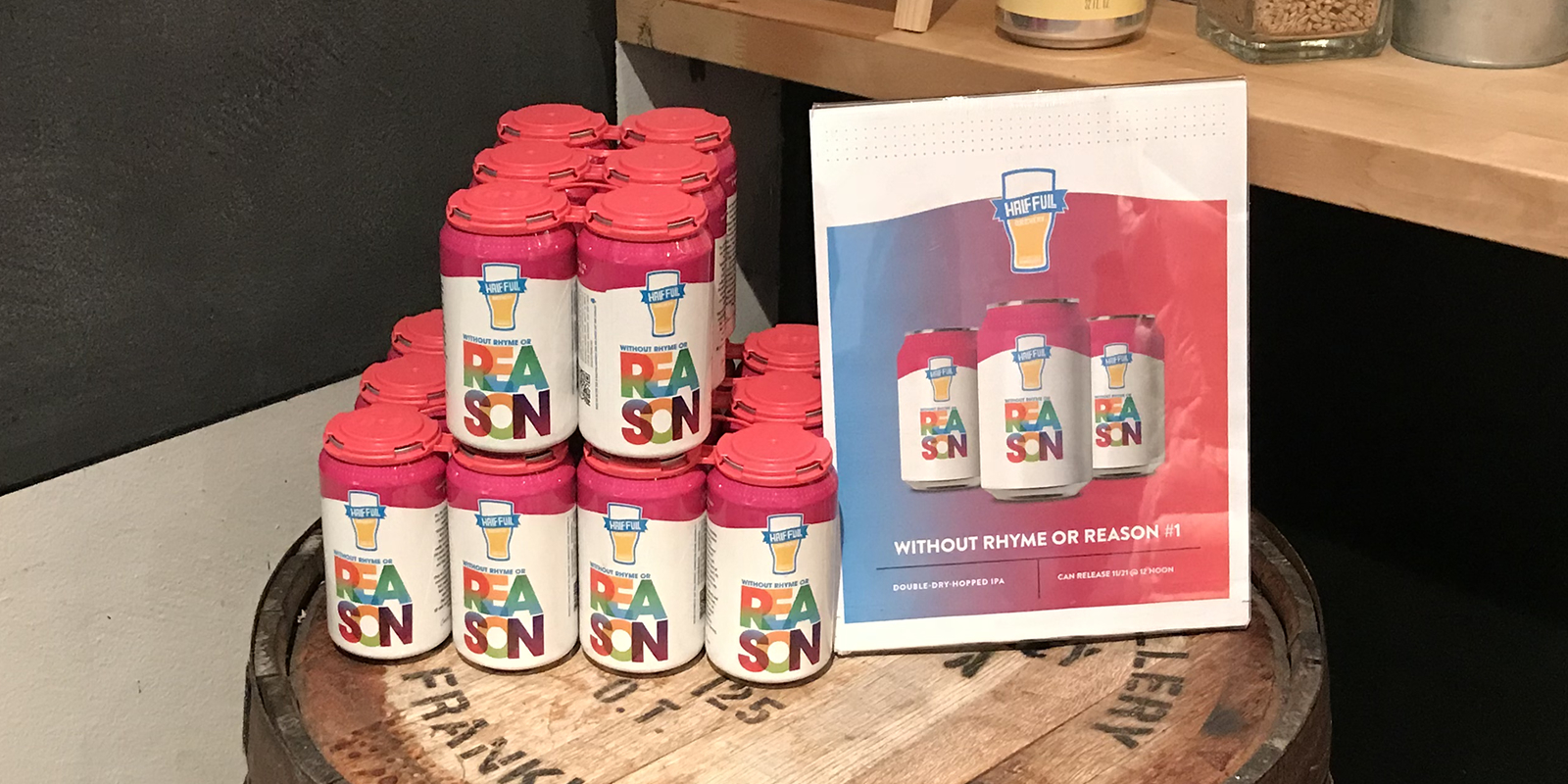 Where: Half Full Brewery – Stamford, CT

What: Half Full Brewery – Without Rhyme or Reason – Amelia (WROR #1)

What’s up, Window Sillers? Half Full Brewery, which is located on Homestead Avenue in Stamford, CT, is getting set to release the first cans in its new “Without Rhyme Or Reason” series on November 22nd at noon, and I got an exclusive pre-release six pack to review for you!

If you’ve been sleeping on the Stamford, Connecticut beer scene, you better wake up, buddy. Stamford is the “City that Works,” but maybe they should consider renaming it the “City that Brews.”

Last week, we covered a release from another Stamford Brewery, Lock City, and I’m just as excited about this one from Half Full. First, a bit about the brewery itself. Half Full was founded by “Chief Optimist” Conor Horrigan, who left behind a life on Wall Street and started slinging craft beer back in 2012.

“I was working this Wall Street job, and I just felt like I wasn’t doing anything to benefit people,” Horrigan told The Stamford Patch in September. “I was surrounded by people who were working to benefit the world, and here I am on Wall Street. It just didn’t feel right.”

What started years ago with a kitchen stove and a recipe for Bright Ale (the flagship brew has since been modified and perfected) has turned into a source of pride, not just for Stamford, but for all of Connecticut. That brings us to Wednesday’s release, which is the first ever on-premises-only can release for Half Full, and marks the beginning of an exciting new series from the brewery.

“These beers don’t fit into any particular series,” says the official description on the can. “and they don’t adhere to any particular style; they are brewed for nobody and everybody at the same time…but mainly they’re for us.”

Scanning the barcode on my can brought me to WROR landing page, which not only has the ins and outs for this release, but also for all of the WROR releases in the near future. You guys should definitely check those out. Looks like there’s some interesting stuff coming down the pike!

Anyway, it turns out that, #1, is actually named Amelia (which is also printed near the bottom of the can in small letters). It’s a Double-Dry-Hopped IPA brewed with both raw and malted wheat, flaked oats and even some lactose sugar. The hop profile includes Simcoe lupulin powder, and the DDH comes courtesy of Mosaic and Ekuanot hops. Half Full says the beer is “hoppy, hazy and turbid,” three characteristics i really enjoy in my IPAs.

I got home and stuck the cans in my fridge for a while. They’d been in my car for a little over an hour while I visited my parents on the way home from the brewery, and needed to be a bit colder. I finally popped a can open a little after 9, after I lost on the Savage Question on HQ (if you don’t know what that is, you’re missing out). I poured it into the Half Full tasting glass I got when I last visited the brewery some years ago–proper glassware is always key–and took a whiff. Citrus lit up my olfactory system like the aurora borealis does the northern skies. OK, to put it more simply, it smelled really fricking citrusy and delicious.

Next came the taste, and I wasn’t disappointed. It hit hard with the citrus first, but the mouthfeel was much softer than I had anticipated, almost powdery and pillowy soft. The juice flowed smoothly, and the hoppy kick came in soon after. The finish was hoppy and bitter, too. After the sip, my mouth felt almost covered with soft deliciousness… really pleasant! As the beer warmed up, and more flavors started coming through, I knew I definitely had a winner.

I really want you guys get a chance to head down to Stamford on Wednesday to pick up some of these for yourself. I was just excited to be a part of something new from a brewery I have a lot of respect for. I love when local breweries do these types of experimental releases for no reason other than to experiment, and I really hope it’s a raging success. The fact that I happened to also really like this beer was a major bonus for me.

I also need to send a special thank you shoutout to Jordan Giles, the Director, Branding & Customer Experience at Half Full. I wanted to cover this release, so I reached out on Twitter to see if the brewery could provide me an image to use as a header for this post. Jordan messaged me on Instagram the next day, and later emailed me with an invitation to come down and get a six pack at the brewery. His–and Half Full’s–generosity caught me completely off-guard. I didn’t even realize I was getting a pre-release six pack of this beer until the awesome dude working the bar—in all the excitement, I foolishly forgot to ask him his name—brought it out to me from the back. I thought Jordan was just being nice, and giving me a random six pack of one of their already-existing beers. I was floored to be, potentially, one of the first outsiders to try a can of this release. It’s truly an honor.

It’s really awesome when a brewery reveres its fanbase as much as the fanbase reveres it. I was already a fan of Half Full before yesterday, but I’m definitely a fan for life now.

If you guys are lucky enough to get some of these cans, take a picture of them on your window sill. Tag me, and use the #beersonwindowsills hashtag on Instagram or Twitter for a shoutout. Most importantly, head down to Half Full… even if you miss this release!

Check out some exclusive photos from my trip to Half Full: