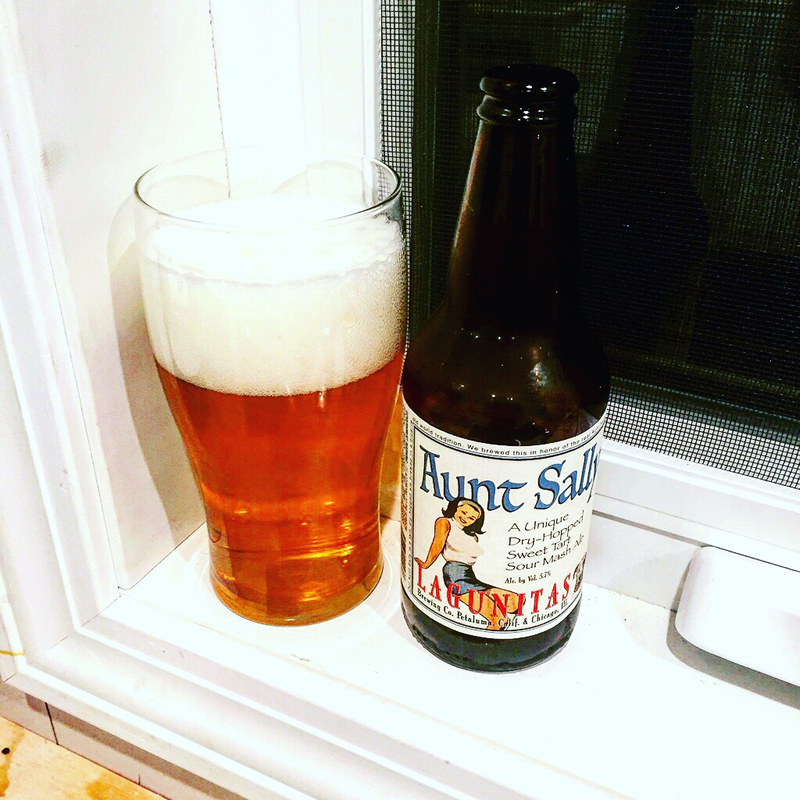 Today on the window sill, we have the story of the woman I love, and the beer that once seemed undrinkable: The Aunt Sally, by Lagunitas Brewing Co.

There was a time when my wife, Jeannie, couldn’t drink. No, she didn’t have a drinking problem or anything like that, but physically… She couldn’t drink. Even something as simple as a glass of wine, or one beer, would send her stomach into a three-day tumult. For a woman whose friends once lovingly called her “Pub Jeannie,” when she’d go out drinking with them, this was definitely a change.

If it was only booze that caused her this discomfort, we wouldn’t have been as concerned about it (it would just be a bummer), but many different kinds of foods caused her the same problems. She could only eat small portions, and she had to avoid things like garlic, red meat, or anything really heavy, otherwise it would make her feel sick. She also got terrible heartburn and pressure. Sometimes, there seemed to be no rhyme nor reason to what food made her feel sick, but any kind of alcohol was problematic. It was bad.

All of this made it hard for us to do even do simple coupley-type things, like going out to dinner, or out for drinks with friends. We just never knew when something she ate wouldn’t sit right. Also, it was a bummer for her to be out with a bunch of people who were drinking and she couldn’t, and she didn’t even really know why. To her credit as a partner, she never minded if I went out from time to time for drinks with friends. Selfishly, though, I missed having my best friend out and joining the fun, and it was a bit of a drag thinking that she had to stay home alone with the cat (although we all know how I feel about that guy).

She went to several specialists, who all had different theories. One said it was chronic heartburn. One said it was Gerd. We read some message boards online that suggested it could be related to the fact that she’d had her thyroid removed. For a while, we thought she might just have been lactose intolerant, but cutting out dairy only helped for a couple of weeks before symptoms returned. You could have told us it was witchcraft, and we would at least have considered going to see a shaman, or finding out if our house was on an ancient cemetery or something.

To deal with the burn, she began taking Zantac regularly. That didn’t do anything, so she was prescribed Protonix. I don’t know what you know about those, but they can cause all sorts of not-so-good things, like osteopenia (the precursor to osteoporosis). Also, those didn’t even work that great. She still got sick fairly often, and had to put up with the terrible side effects..

Even the doctors who prescribed the Protonix knew they weren’t a good long-term solution, and always advised her to stop them. However, that seemed like an impossible task. Even missing a dose by a few hours would set her stomach spinning.

When we started planning our wedding, we noticed everything got worse. Not only that, but the fear of feeling sick was causing her to have constant anxiety, and even led to a couple of panic attacks. One time, it happened on a crowded train ride home from the city. We had to get out a few stops early so that she could take a Xanax and calm down. Once she was better, we were able to continue our journey home.

Enough was enough. A few weeks before our wedding, she asked her doctor for a new prescription. It wasn’t for her stomach problems, though. It was for the new anxiety she was dealing with. Unfortunately, they didn’t kick in in time for our wedding (it takes about a month), but after we were blissfully wed, she slowly stopped getting those panic feelings in crowded places.

She also noticed she stopped getting heartburn. A year or so after the wedding, she ran out of her Protonix, and was forced to go an entire weekend without them. Nothing happened. She didn’t feel sick at all. When she got her prescription refilled, her doctor told her there would basically be no more after that, unless she really tried to get off them and failed.

One day, she just stopped taking them, and she never felt sick again. It turns out that her anxiety wasn’t happening because of her stomach problems. Her anxiety had actually been causing the problems all along. Suddenly, she could eat like a normal person. If she got heartburn, or that gross full feeling, it was for normal reasons, like eating too much, or eating acidic foods.

She slowly started reintroducing alcohol. A glass of white zin here, a margarita there… even a little beer from time to time. Never too much, and always careful. Guess what? Everything was OK. No stomach problems at all! Pretty amazing, right?

This past fall, while out at Whole Foods, we picked up a couple of Aunt Sallies because a) I love Lagunitas Brewing Company, and have been to the Chicago location, and b) we liked the name, as well as the description on the bottle.

The Sally is apparently inspired by a real person, and is described by Lagunitas as “a unique dry-hopped sweet tart sour mash ale.” Unique is the only real word for it. It’s fruity and sour, although not to either extreme. The weird part for me, is that it smells kind of like an IPA, but doesn’t taste like one. I think that’s what loses me a little bit. It’s like my brain is being tricked. The label also says it tastes “like a big bowl of fruity candy or some chewable flavored vitamins.” I guess I can see that, but something is missing.

For me, this beer was just OK. I even had another while writing this post to see what the big hullabaloo was about, and although I appreciate this brew, it doesn’t get me going like a nice IPA or chocolate stout might.

This is great news for Jeannie, because for her, it was love at first sip. Also, she doesn’t have to compete with me for these, like most of our other beers. She likes the Sally because it’s refreshing, and not as sour as a Gose (which she doesn’t like at all). Also, unlike some fruity beers, the Sally retains its beer flavor. You know you’re drinking a beer, she says, instead of some kind of fruity drink. Her final words: “It’s so light I could down it.” Considering she could barely down a handful of food a little over a year ago, those are huge words.

So here’s to Aunt Sally, and the love of my life, Jeannie: a match made in heaven. As for me, I’m just glad to have my drinking buddy back!