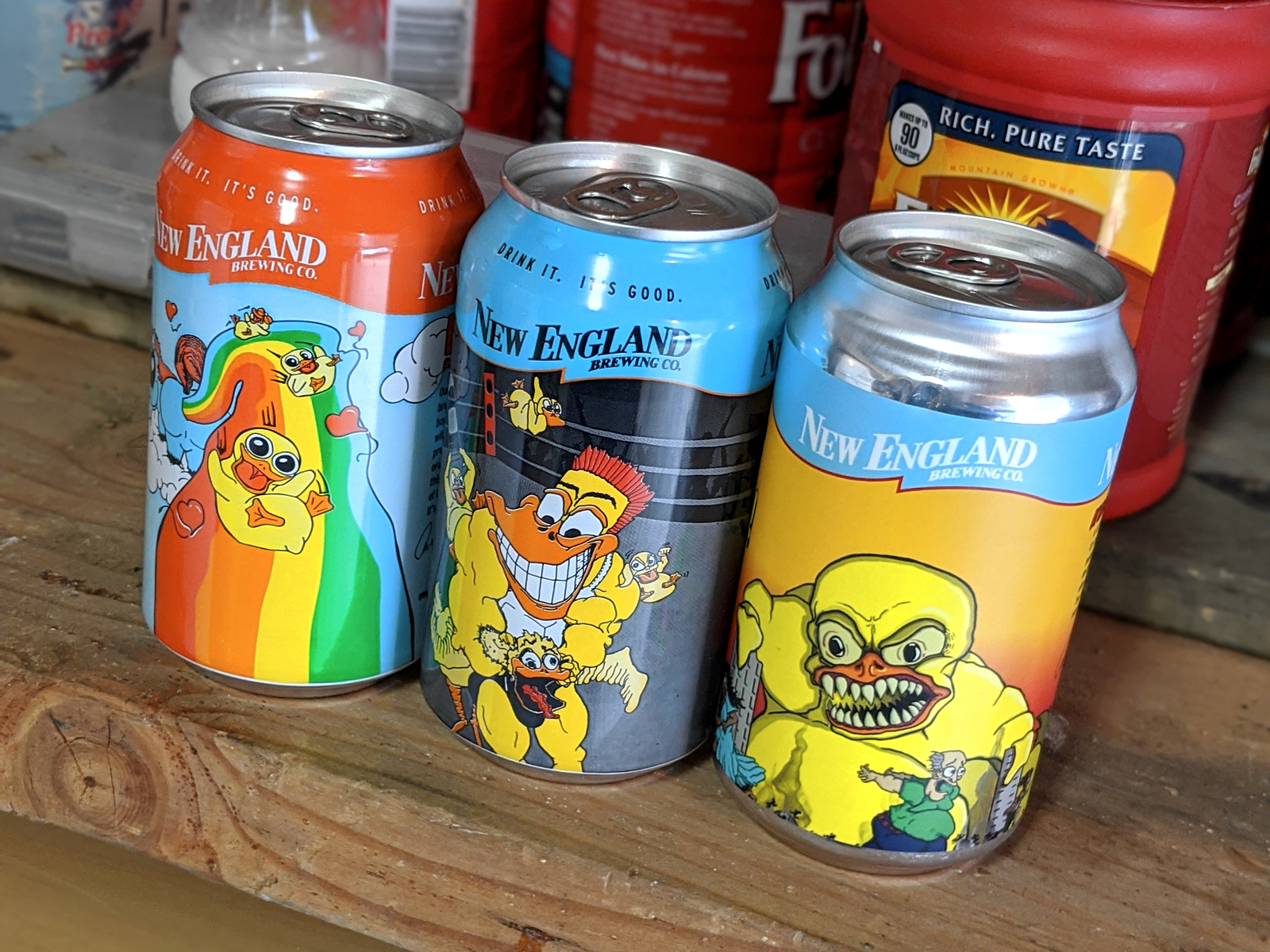 If you know my Windowsill, you know it LOVES some Fuzzy Baby Ducks from @newenglandbrewing. If you’re a fan from way back, you know I went to the first-ever release of Double Fuzzy Baby Ducks back in 2017. Well, this past weekend, NEBCO released the biggest version of this Citra-hopped IPA yet: Attack of Duckzilla – Triple Fuzzy!

I went with my good pal, Mike. We got in line at a little after 11:00 AM and waited in the cold Woodbridge, CT air. OK, we didn’t wait too long before I went in and bought us each a full pour of another new brew from NEBCO, the Davidly Roth imperial stout (it was so amazing, we both got growlers). Within the hour or so, we had our Triple Fuzzy and more, and went on our way home.

In the end, we spent way too much money on beer, but it was worth it! Check out all three Ducks on a makeshift sill in my garage! I haven’t opened a can yet, but I had the triple on tap at NEBCO and it was incredible! 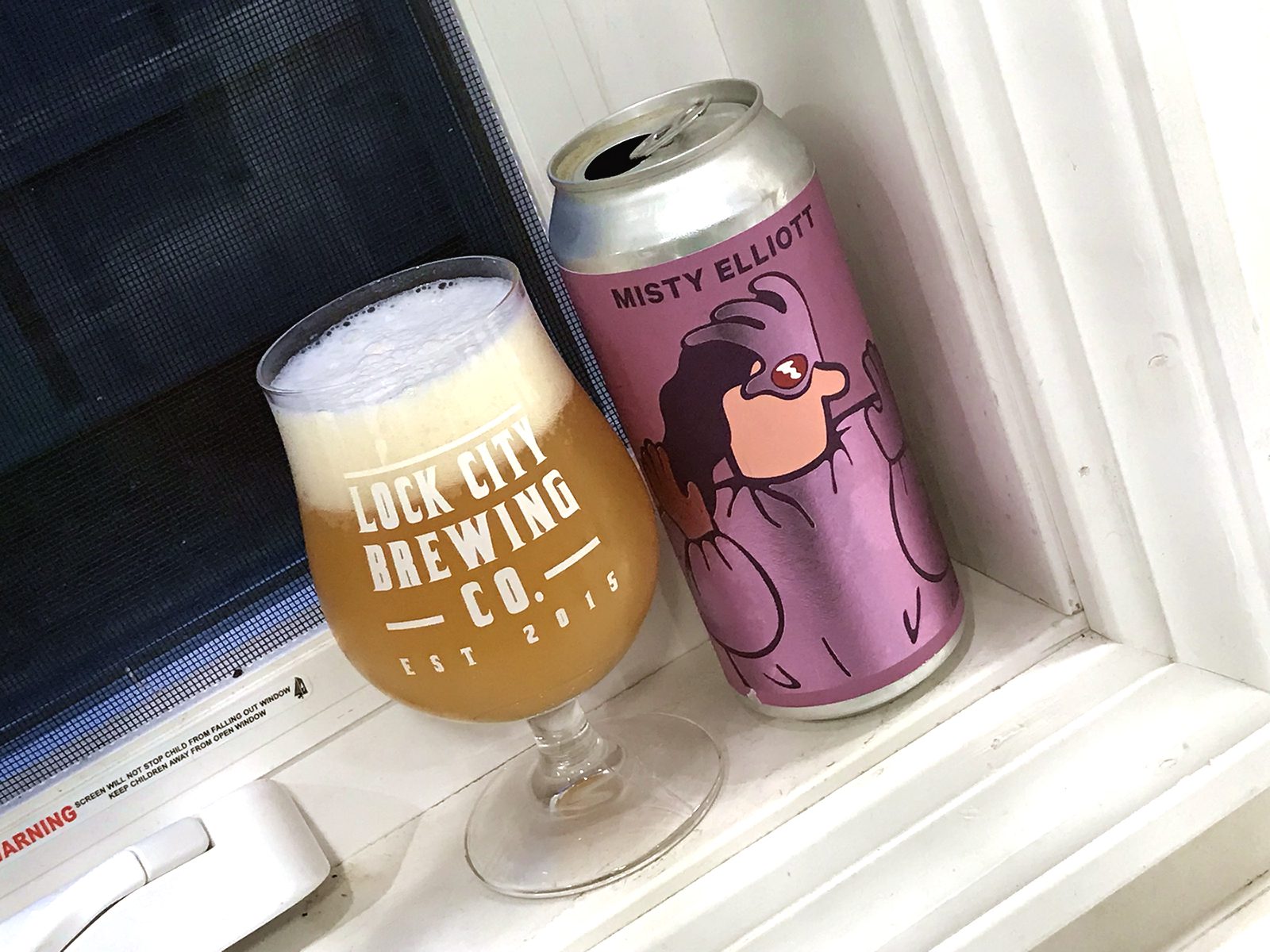 Let’s get supa dupa fly on the Windowsill today!

I’d like to get to know ya so I can show ya… a little bit about the great Missy “Misdemeanor” Elliott. The Virginia native overcame a very tough upbringing to become a true pioneer in the hip hop game for women. You must know her hits, like “The Rain (Supa Dupa Fly),” “Work It,” “Get Ur Freak On,” “One Minute Man,” and many others. Now, the First Lady of Hip-Hop (sorry to all the pretenders to the throne, new and old) is commemorated on a beer from Mikkeller Brewing San Diego, and I was excited to try it!

While Missy Elliot couldn’t stand the rain against her window, I really enjoyed having the Misty Elliott on my sill. Supa dupa juicy. Supa dupa hazy. Supa dupa strong with that ABV. For me, though, it was supa dupa smooth for a triple IPA. Not sure what hops, but whatever the recipe, I really enjoyed it. There’s also that label art from Keith Shore, perfectly “Mikkellerizing” the Queen in her inflated purple suit. Don’t put this beer down. Instead, you should flip the Misty Elliott and reverse it into your mouth hole. Cheers!

Check out our Instagram for more great craft beer photos and stories! 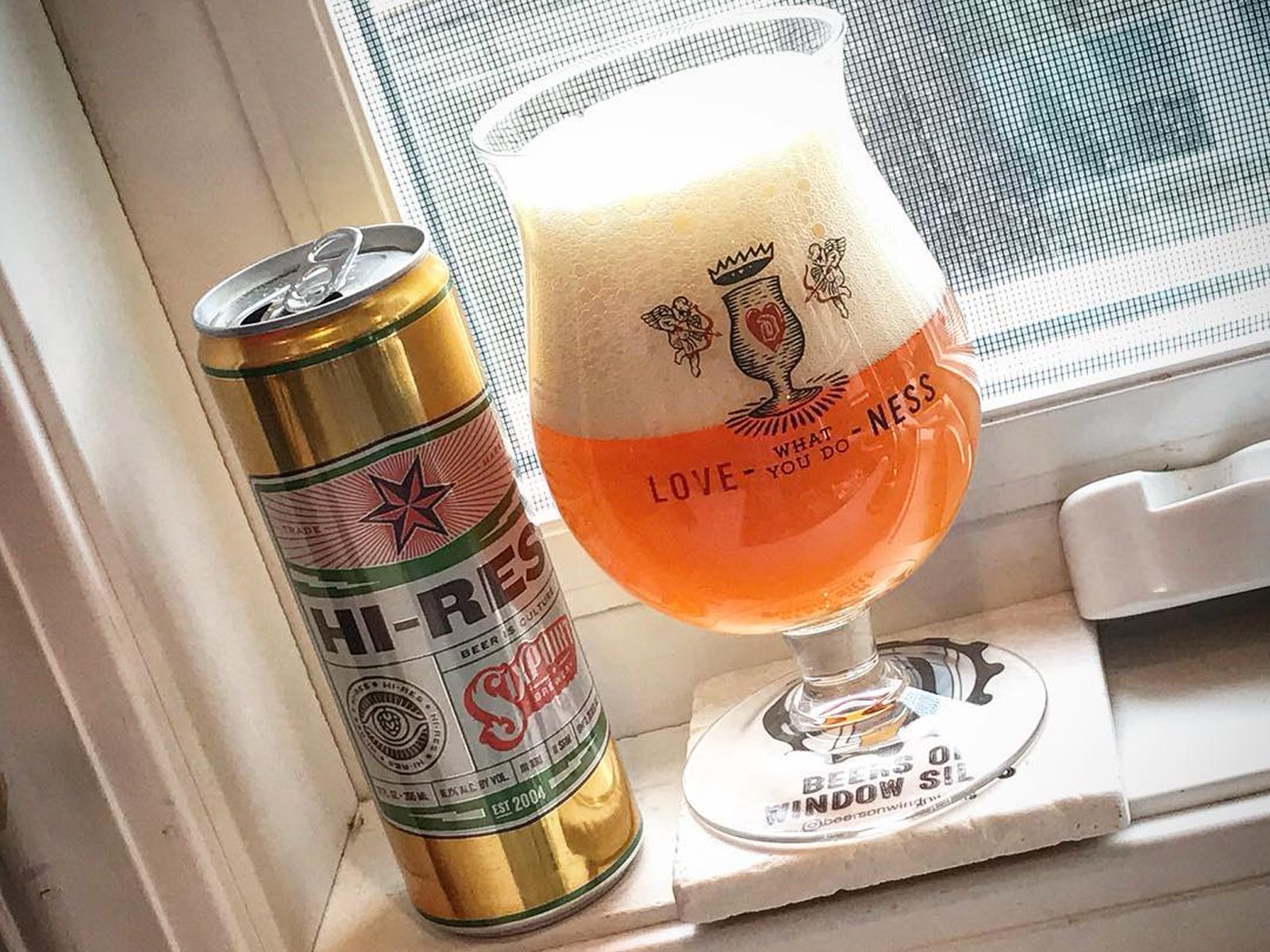 The Windowsill is definitely in high resolution today!

Brooklyn, New York’s Sixpoint Brewing Company was the result of a guy from Milwaukee and a guy from Manhattan bond over beer. Andrew Bornstein (the Manhattan guy) and Shane Welch (the Milwaukee fella) met while attending the University of Wisconsin (Go Badgers). Welch, and avid homebrewer, had the recipes. Bornstein put up the cash, and Sixpoint was born. Their brewery is housed in a Brooklyn factory that was once used to make filing cabinets. These days, they’re just filing good beer after good beer.

The Hi-Res Triple IPA is a bit of a monster, weighing in at 11.1% ABV and 111 IBUs. It’s basically an amped up version of their DIPA, Resin, which we haven’t had on the Windowsill before. It’s got some bomb hoppiness aroma to it, as you can imagine, and lots of solid tropical, sweet and resin flavors in the background. Despite the big ABV, not a lot of boozyness to it. If you like Resin, you’ll love Hi-Res! 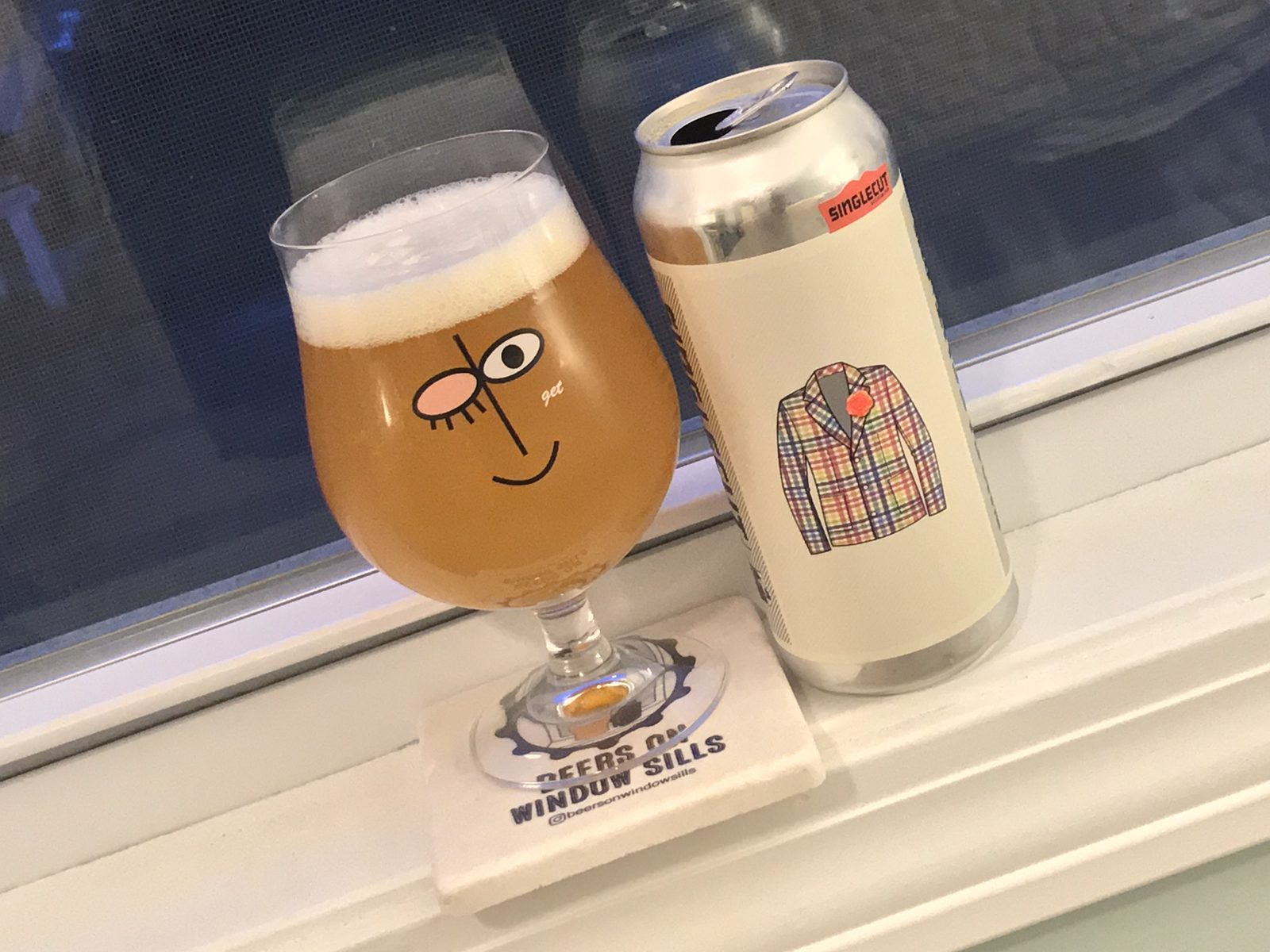 We have another kickass New York beer on the Windowsill today!

SingleCut Beersmiths is at it again with the rock references! “Tomorrow Who’s Gonna Fuss?” is a lyric from the song “Androgynous” by the Replacements. The song says: “Here comes Dick, he’s wearing a skirt / Here comes Jane, you know she’s sporting a chain / Same hair, revolution / Same build, evolution / Tomorrow who’s gonna fuss?” The song goes on to say that Jane and Dick love each other, and the message behind it is… In the grand scheme of things, who gives a crap what they look like, their gender or who they love? This is a message that I fully support. Love whoever you want, as long as you love my Windowsill! Logo note: To the best of my understanding, the Replacements wore a lot of plaid. The reason behind rainbow coloring should be clear.

I’ve been on a bit of a triple IPA kick of late, and I think I’ve found the absolute cream of the crop with the “Tomorrow Who’s Gonna Fuss?.” SingleCut doesn’t say what the hop blend is for this beer, and I don’t want to guess and reveal my novice status in the craft beer game, but just know that this is triple dry-hopped to go along with being a triple IPA. Triple! All that brewing, and hopping contribute to not just the hefty 10.0% ABV, but also to the highest IBU total I’ve ever had in a beer, 155. Despite all that bitterness and alcohol, it’s incredibly smooth and easy-drinking. No booziness at all! Goodness, gracious this was great. Tomorrow, I will still definitely make a fuss about it! 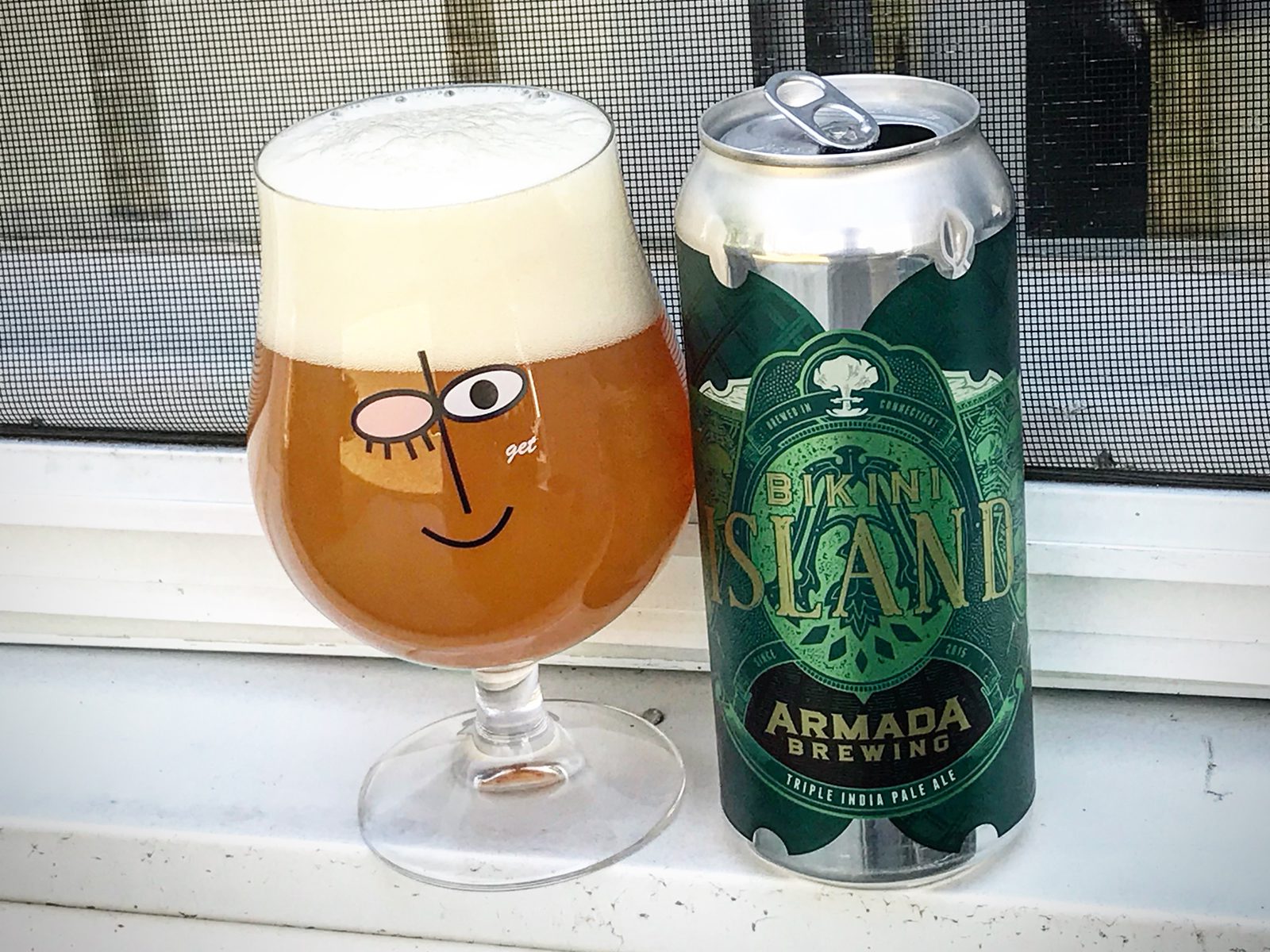 Is it summer yet? Cuz I’m getting my bikini on on the Windowsill today!

Connecticut’s gypsy brewery, Armada Brewing, makes its solo debut on the Windowsill Remember the Candy Castle collaboration with BAD SONS Beer Company?). Bikini Island is named after a real life place, the northeastern most island on the Bikini Atoll, which is a ring-shaped coral reef in the Pacific Ocean. The fun fact about this area? From 1946-1958, the United States tested 23 nuclear explosions all around it. The reef’s natives, who was promised they’d be able to return home in no time when they agreed to give up their home, are still out of luck. They ended up shuffled around to two other Atolls, and the area is unlivable to this day. Good job, U.S. Government!

Now that you know the history behind the name, let’s talk about how incredibly delicious this beer is. The Bikini Island is a triple IPA hopped only with one of my favorite hop varieties, Mosaic. This beer has three things I really like. It’s hopped to the gills with a high IBU, it’s bright and tropical and, at 10% ABV, it really packs a punch. It was really a great brew, and once I had it, I was pretty much set for the night. Can’t wait to try more from Armada Brewing! 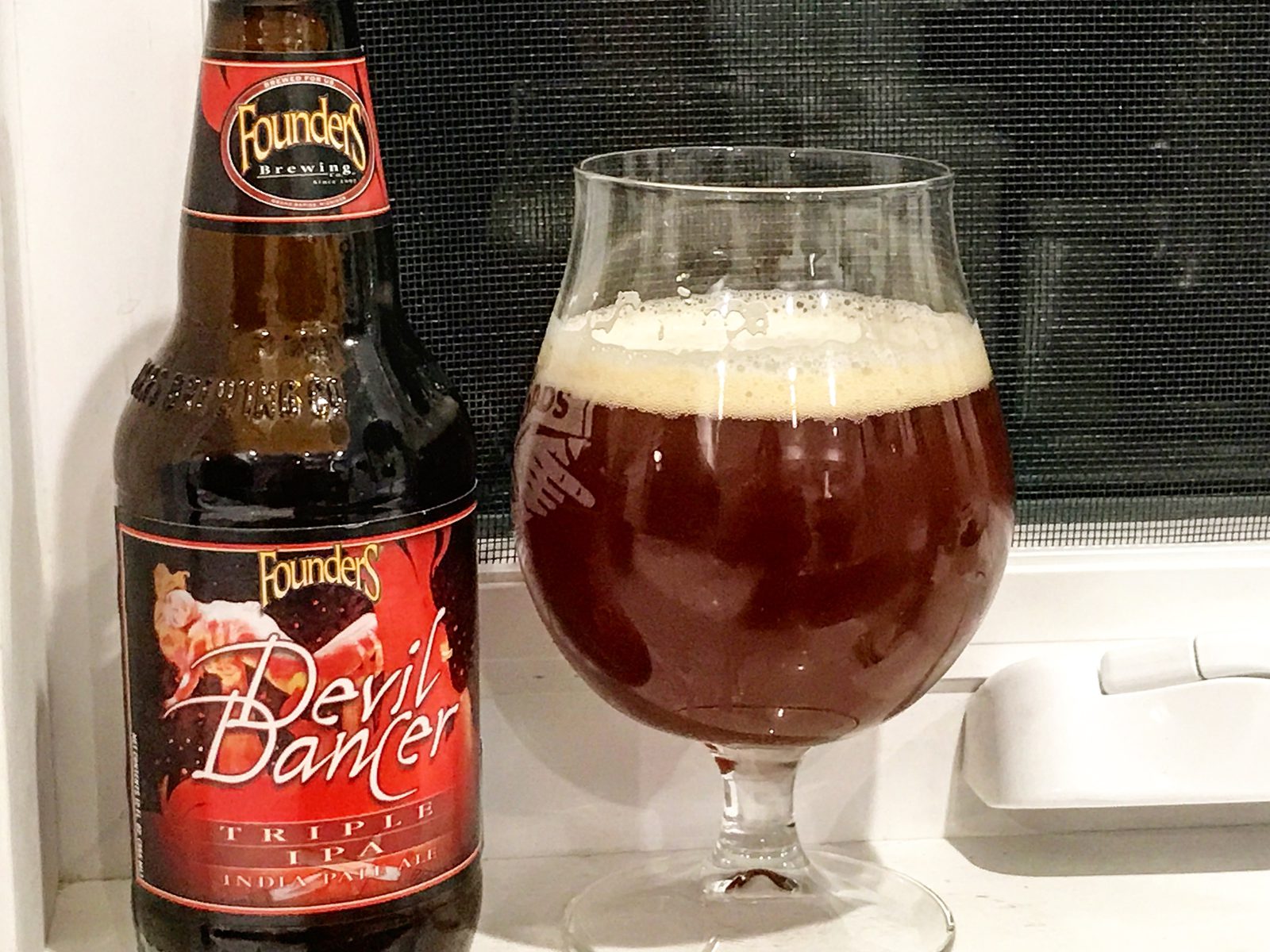 Do you ever dance with the Devil in the pale moonlight? How about on a Window Sill? END_OF_DOCUMENT_TOKEN_TO_BE_REPLACED 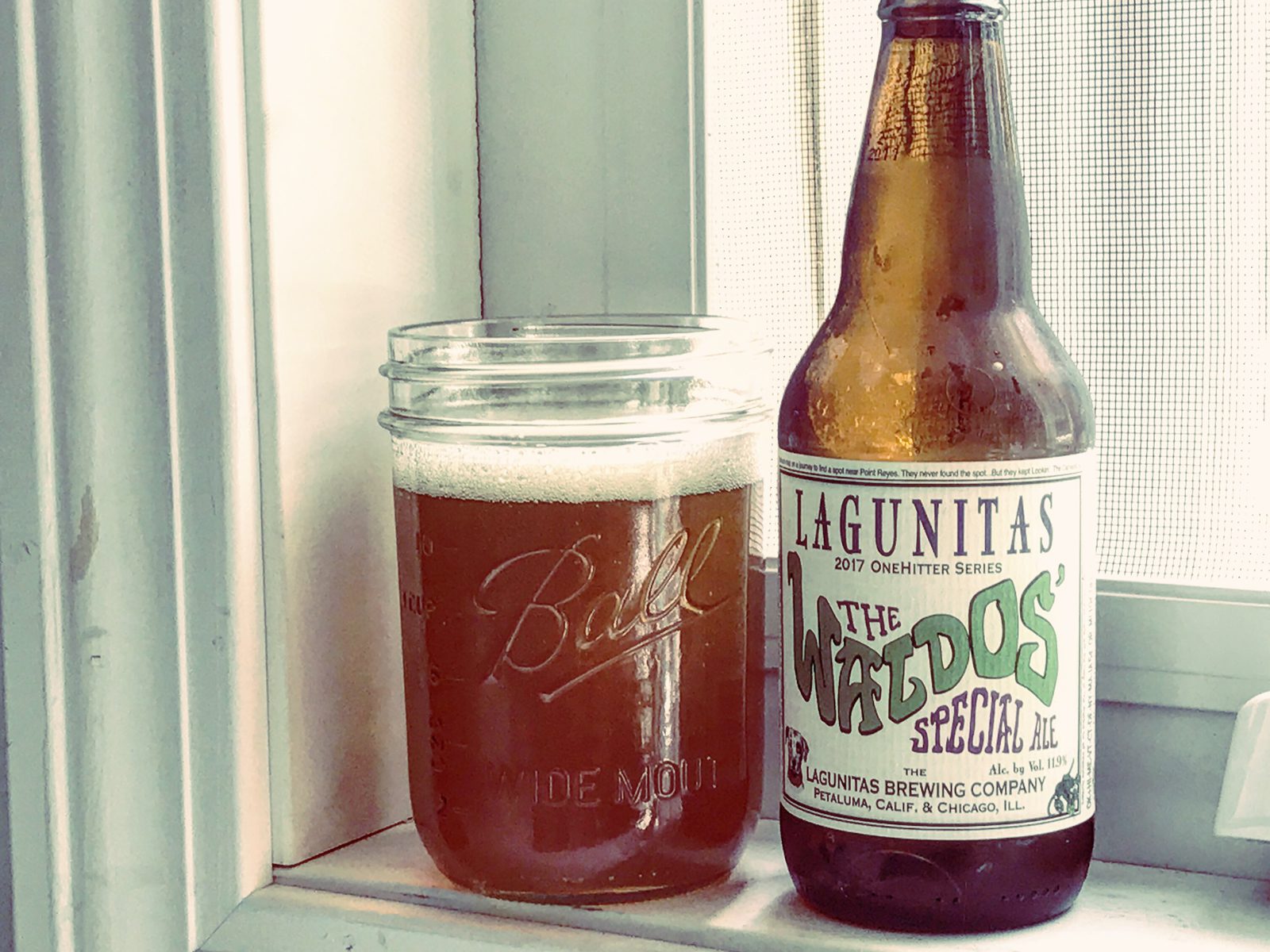