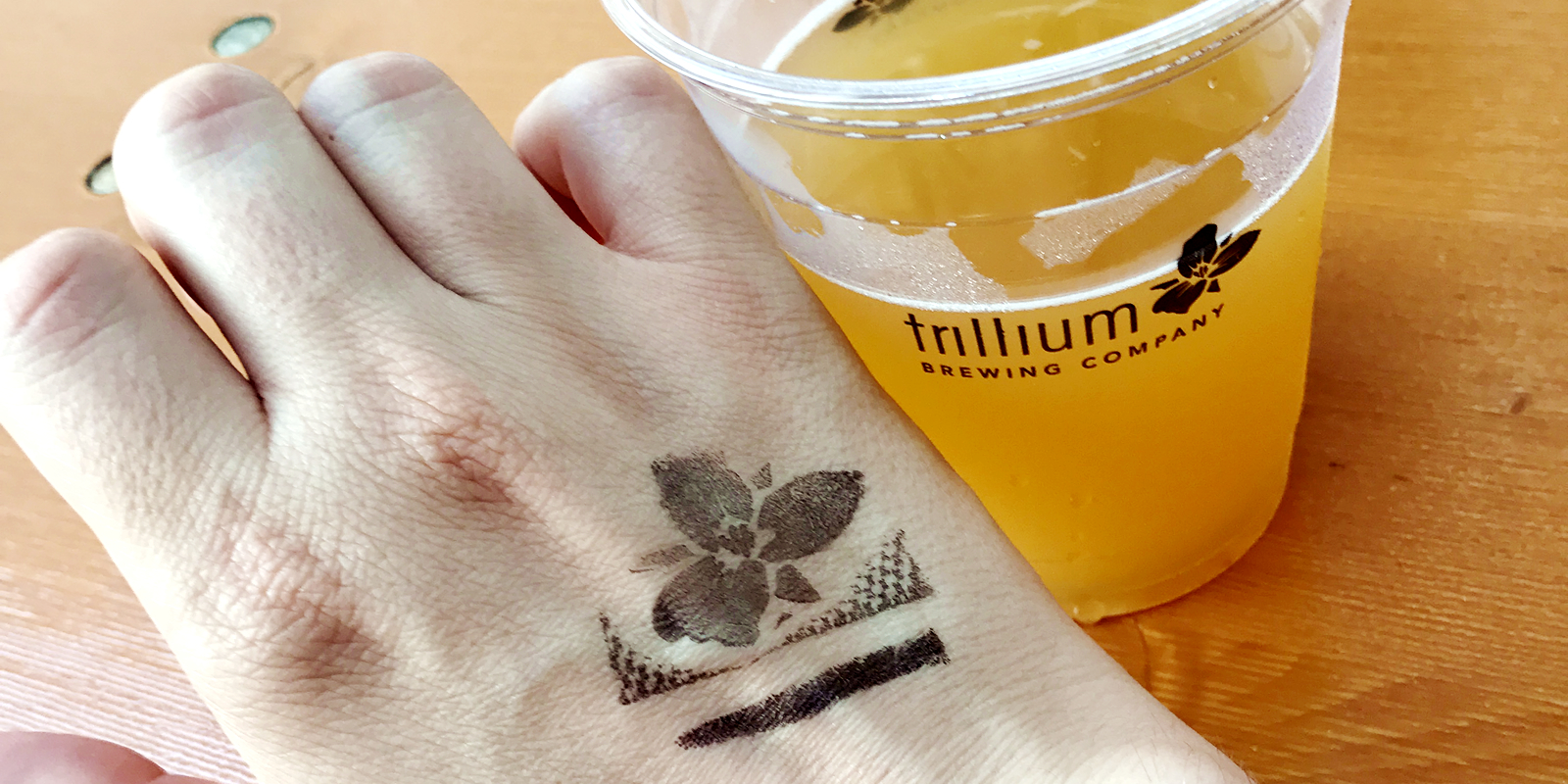 As I mentioned in the first post of this BoWS Goes to Trillium series, my trip to Boston might as well have been called “a series of fortunate events.” The fact that I basically accidentally stumbled into the Trillium Garden on the Greenway is just another example of how everything was coming up Millhouse for me.

First, a little history of the garden. It is located in the Rose Kennedy Greenway–a linear park consisting of gardens, plazas, fountains and works of art over a mile long, through Chinatown, the Financial District, the Waterfront and the North End. As the park curves up towards the North End and reaches the Rowes Wharf Arch, you can see a nice brick patio across the street surrounded by some lovely trees. That’s where Trillium set up shop, bordered by Atlantic Avenue, High Street and Purchase Street. It’s not huge, but just big enough to house you, and 249 or so of your closest friends.

The Greenway is maintained by the Rose Kennedy Greenway Conservancy, a nonprofit organization dedicated to securing “the Greenway’s future as one of America’s foremost urban parks.” According to Boston.com, the Conservancy approached Trillium with a request for a quotation in March, with the hopes of launching the joint venture in June. That meant Trillium cofounders JC and Esther Tetreault had just a few months to design, plan, build and staff the entire project. One of the neat new things they put together was a trailer with built-in draft systems on either side. They put a bar on each of the trailer’s flanks, and voila… Beer Garden. Anyway, because they’re amazing at what they do, the Tetreaults got everything up and running just in time, and the beer garden launched without a hitch in early June.

So how did I end up there on a Wednesday afternoon in early August? If you’ve been paying attention, you know… dumb luck! My wife Jeannie, whom you may recall had a work-related conference in Boston, had Wednesday afternoon off, so we decided to catch a Lyft to Boston Common for a walk around the famous Freedom Trail.

I knew about the beer garden, and that it was probably somewhere near by, but I wasn’t sure where it was. Plus, I’d already been to the Trillium store earlier that morning, and had plenty of beer to drink back at the hotel. Also, rain had been coming and going all day, so we decided to hoof it back to the hotel to grab dinner and a brewski in the room.

There was one problem, however. Because we’d had coffee and water on our walk, and had been out all afternoon, we both had to pee pretty badly. Our route home took us through a bunch of public parks (we didn’t even know we were walking through the famous Greenway), so we figured we might be able to find a public bathroom of some kind on our way home. Suddenly, Jeannie turned and said: “Hey, aren’t those porta-potties over there?” I looked, but I couldn’t really tell, so we started heading in for a closer look.

I couldn’t see the bathrooms, but I did see what appeared to be an open trailer of some kind, and a decent-sized gathering of people around it. Suddenly, the trailer door closed, and I saw what was painted on the door: the Trillium logo. That’s right, dumb luck and the need to pee had brought us to the doorstep of the Trillium Garden on the Green. I gasped, and explained what we were looking at to a curious Jeannie. Obviously, she said, we had to go in.

We got to the entrance, and the giant bouncer checked our IDs. Seeing that we were of age, he waived us through to the next person, who stamped our hands and welcomed us in. We headed directly to one side of the trailer to order a couple of beers. They had a bunch to choose from, maybe five or six in all, and even a couple of wines from Massachusetts’ Westport Rivers Winery, for those looking for a bit of the red or white.

I went with the Galaxy Cutting Tiles Double IPA, because I remembered seeing it as a growler only option at the retail store earlier in the day, and wanted to try it.  Jeannie was intrigued by the Miles Away, a sour wheat ale aged on passion fruit and Guava, but it proved to be way too sour–seriously, it was like one of those warhead candies, times a million. In the end, she also went with the Cutting Tiles. We found a place to sit with some people at one of the picnic tables, and started sipping on our beers.

My goodness was the Cutting Tiles good. It is hopped to death with tons of Galaxy hops–there are other varietals of this beer made with other hops, too–and brewed with raw wildflower honey. It was crisp and hoppy, but still light and tropical with a not-so-bitter finish. Really, just delightful. Just look at the photo above. Looks like straight juice, right?

Sadly, 20 minutes after we sat down, as were discussing how great the beer was, and how funny it was that we’d just run into this place out of nowhere, the weather turned. Like in that old story about that spider who was itsy and bitsy, down came the rain and washed our party out. We huddled under some trees with a few fellow beer lovers to see if the deluge would stop, but it only got harder and harder. We decided to finish up our DIPAs and catch another Lyft back to the hotel.

I actually ended up there again on Thursday night. Jeannie had a networking event, so I met up with my college buddy, Joe, for a couple of beers. I decided to try the Itty Bitty Goose Pale Ale–even though I had a 4-pack back at the hotel–and the Coffee Pot & Kettle Oatmeal Porter. I enjoyed the Goose, which you can read about on Instagram and, although porters aren’t my thing, the Pot & Kettle was really big on coffee flavoring, which i found to be super pleasant.

I really hope Trillium and the Greenway Conservancy do this again next year. Not only is it a cool way to spend an afternoon, and a great way for Trillium to spread the word about their quality beers, but the profits from the garden create a new source of income that will help the Conservancy do what they do. Everybody wins!

Although our visit was brief, I was really quite happy because I’d gotten to drink some fresh Trillium beer straight out of the tap for the first time in my life. On top of that, Jeannie had tasted Trillium for the first time and really liked it too, which doubled my joy. The two of us had so much fun, in fact, that we didn’t even remember to go to the bathroom!