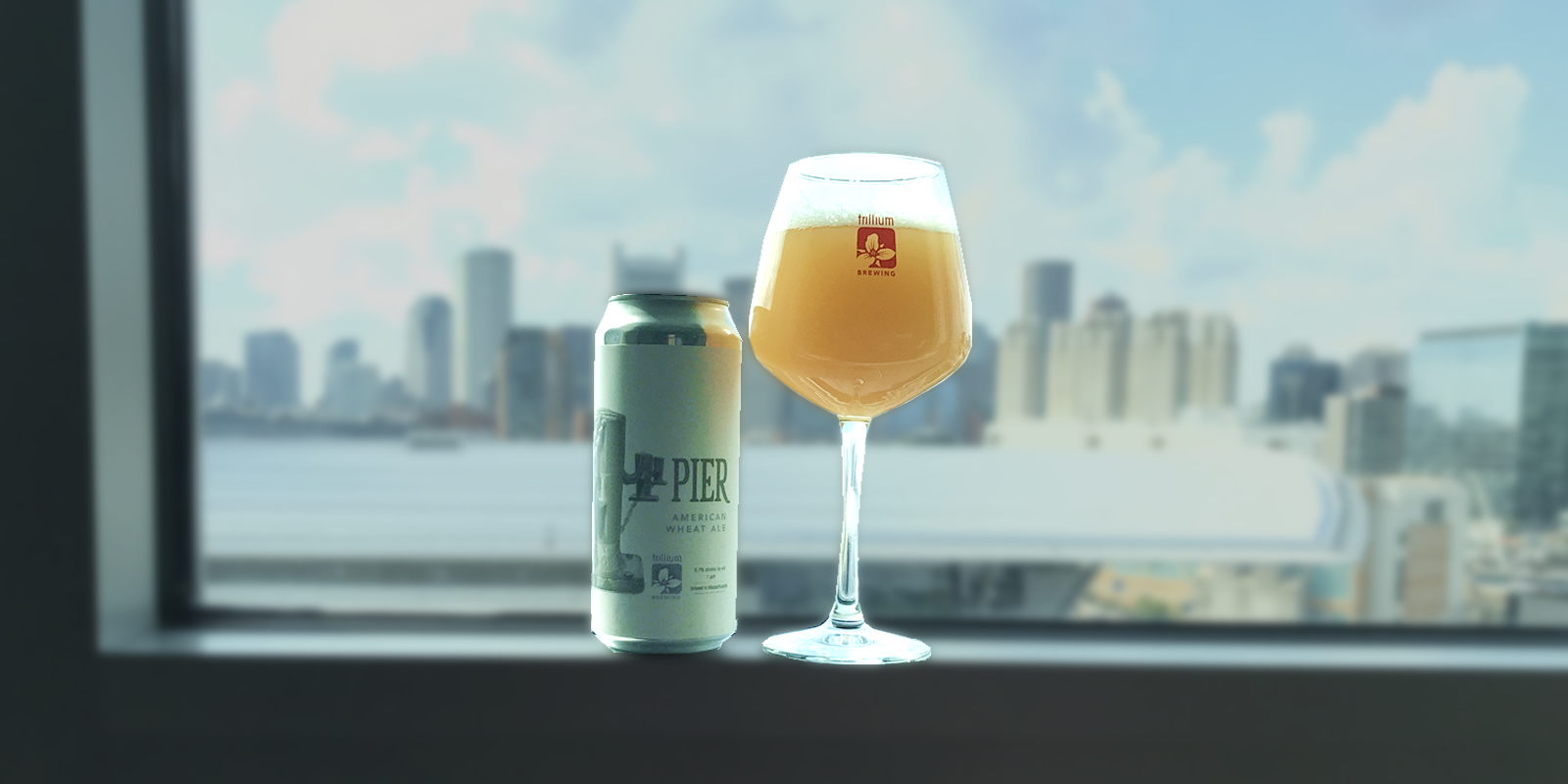 When you love good beer, and put good energy into the world, sometimes fortune smiles upon you. That’s what I learned from my trip to Trillium Brewing Company this week. A lot of really cool stuff happened over the few days I was in and around the brewery, so I’m going to break them down over a few posts. Let’s start with my first trip to the retail store.

The trip itself was about 90% dumb luck to begin with. Every year, my wife goes to an email marketing conference in Boston. Because I’m a great husband, and I love staying in free hotels and not going to work for a week, I joined her for the second straight year. Now, her conference was full of events that took up all of her days and most of her nights, so I knew I would have to mostly entertain myself this time around. What better way to do that, than to find some beer trouble to get into in my old city? I knew Sam Adams and Harpoon were close to where we were staying, but they never really entered my train of thought. I was focused on making it to one brewery, and one brewery only: Trillium.

I first heard of Trillium, which opened its taps in 2013, about a couple of years ago, when my buddy Tom handed me a can of a beer named “Dialed In Double IPA with Sauvignon Blanc Juice.” The can looked cool, with a pencil drawing-style old rotary phone on it, and I was intrigued by the description… It was truly love at first sip. I had so many questions! Where is this brewery from? How do they make this? Can I have more? Why not? I’ll kill youuuuuuuuu… ahem. Let’s just say I was fired up about this beer. This past Super Bowl Sunday, Tom handed me another Trillium can–the Double Dry Hopped Sleeper Street IPA. Granted, this was still at the beginning of my craft beer journey, but I was, once again, floored. That night, I took a photo of that can (as well as several other beers I enjoyed) on a window sill, and it was among the first posts I ever pushed live on @beersonwindowsills.

Needless to say, I definitely developed some ulterior motives for our next trip to Boston. A couple of weeks before our trip, I decided to see how far I would have to travel from my hotel to a Trillium location. I fired up my Google Maps, plugged in the addresses and hit go, ready to let Jeannie know that I might take the car one day and head to Trillium to pick up some beers while she was at a conference event. Then, I saw the results… 12 minutes. “Well, that’s not so bad,” I thought. “I can hop in the car, drive down to the shop, bring back some beers and be back before anyone knows I’m gone.”

Then I looked again… Google Maps was set to walking directions. Yep. It turned out that Trillium’s Fort Point location was a 12-minute walk from my hotel, just 0.6 miles away! Talk about lucky! Now I was trying to figure out not whether or not I could visit Trillium, but how many times?!

Soon came travel day. Although we’d originally planned to be on the road on Tuesday morning, Mrs. Window Sills and I ended up not leaving the house until 3:30 in the afternoon. By the time we arrived at our hotel a few hours later, it was time for dinner, and the Trillium shop was soon closing. No matter. It would open back up at 11:00AM Wednesday, and I had all day.

At about 11:15 the next morning, after a hearty brunch, I grabbed my cooler backpack and started walking. As I made my way down Summer street, with visions of craft beers dancing through my head, I realized there was something funny going on with my GPS. I was supposed to make a left on A Street, but there was no left turn. I was on an overpass… Was my luck running out? Fortunately, I found some stairs that led me down to A Street, and continued my walk. I soon reached an alley… surely, my luck was about to run out now. How could the brewery be down an alley? I’d been bamboozled! Flim-flammed! Instead of panicking, I composed myself, retraced my steps, found a big sign with an arrow pointing to the storefront and walked in.

I knew the Fort Point location wasn’t a full tasting room, and that only a retail store was accessible to the public, but it was definitely a lot smaller than I envisioned. I don’t think two people could have stood side by side in the space in front of the wooden bar top, and the area behind the bar wasn’t much wider. Length-wise, I would say it couldn’t have been longer than 20 or 25 feet. We’re talking tiny. What I did see, however, were a lot of icy, cold cans of beer. Be still my drunken heart!

Although I already knew what would be available to purchase–Trillium updates their website to let everyone know what canned and tap beers are on hand at both of their locations every morning–I took my time in ordering. In the end, I decided on a two 4-packs of Dialed In (the Pinot Gris juice version), a 4-pack of Little Rooster Pale Ale, a 4-pack of Itty Bitty Goose Pale Ale, a 4-pack of the Pier American Wheat Ale, a 4-pack of a double IPA named Mettle and a 4-pack of the Free Rise Citra Dry Hopped Saison. I also picked up the beautiful long-necked glass you see at the top of this post. Satisfied, I plopped down my credit card, loaded up my backpack (and another bag), and headed out the door.

I got home, documented my haul for an Instagram post, picked up some lunch and popped open one of the Pier Wheat Ales… So good! I knew I had to go back eventually to pick up beers for my friends–any good craft beer lover knows that you always have to help out your fellow crafties when you head to a cool brewery–but that unbelievably lucky visit is a story for another time.

Check out the Pier American Wheat Ale post below!

Trillium Brewing Company: Pier American Wheat Ale We’re going to be talking about Trillium a lot this week, and there’s much to cover. For today’s post, let’s talk about Trillium’s Fort Point location, since that’s where I bought all this fine beer you guys will be seeing on the window sill. It’s located at 369 Congress Street in the Back Bay area of Boston. I was able to walk to it from my hotel, with a cooler backpack in tow, of course. The surprisingly small storefront is a little tricky to get to, because it’s kind of down an alley. It’s easy to miss, but the treasures within make it worth seeking out. The Pier American Wheat Ale is one of those treasures. I bought a 4-pack that was canned just 10 days before my first sip. Talk about pretty fresh! The beer itself is brewed with 30% wheat, and is dry-hopped with Citra and Galaxy hops. It’s peachy, orangey and herbal to the nose, while tropical, citrusy and creamy wheat goodness get your taste buds going right away. The finish is slightly dry and bitter. This beer behaves more like an IPA, which is what one of the storefront dudes said as well. Don’t be fooled! Delicious! ABV: 6.7%, IBU: N/A. Rotating availability. Beer Advocate says: 94 #beersonwindowsills #hopmendous #beer #beerme #beerstagram #beersofinstagram #beeroftheday #brewstagram #beergeek #craftbeer #craftbeerporn #craftbeerjunkie #craftbeerlife #craftbeerlover #mybeerisbetterthanyours #whatsinyourglass #trillium #trilliumbrewing #mabeer #boston #bostonbeer #fortpoint #timetogetdrunk #trilliumonthesill #pier #trilliumpier #americanwheatale #wheatale #wheatbeer @trilliumbrewing