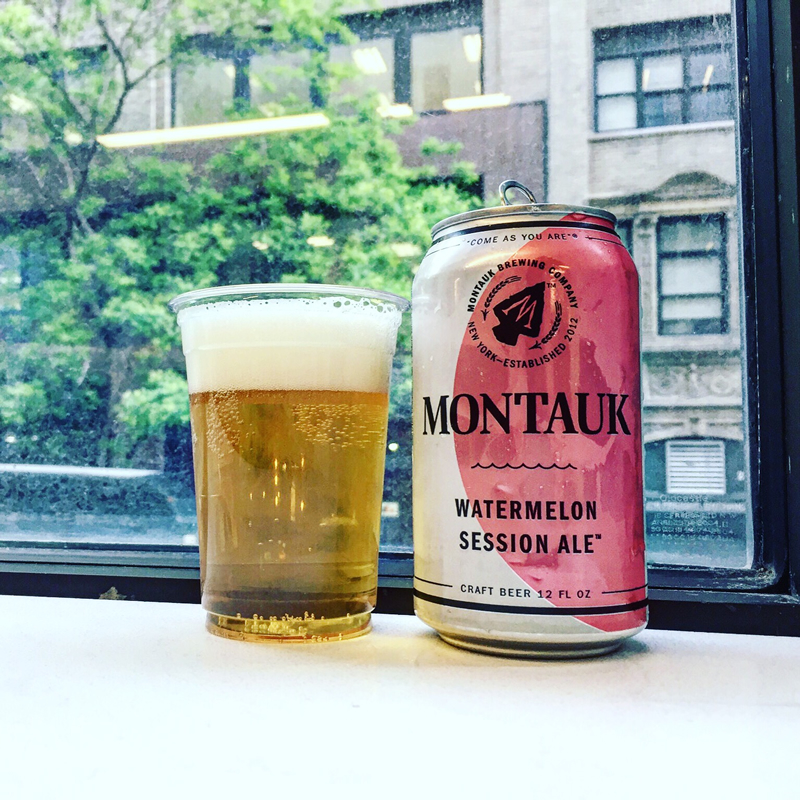 I had a really cool experience with Montauk Brewing Co. this week, so I wanted to tell you guys all about it.

Every Thursday after work, my company graciously hosts a free bar for us in the lobby. Once we’re done with our work, we all head on down to the mezzanine level for some free wine and beer (and sodas and such for you non-drinkers). Because we’re based in New York, we usually end up with a lot of local beers as part of the offering. Did I mention it’s all free?

I’m going to have to thank my CEO for indirectly introducing me to one of my new favorite breweries, Montauk Brewing Co., over the last few months. Over the last year or so, we’ve had several of Montauk’s greatest hits at the bar, and they’ve all ended up on the window sill so far. While I enjoyed the Arrowhead Red Ale, the Wave Chaser IPA, the Driftwood Ale and the Summer Ale, I got to drink my all-time favorite Montauk brew this past Thursday, when the bartender served me up an ice cold Watermelon Session Ale.

The watermelon flavor was subtle, but the filtered pale ale in the can with the pink circle on it really delivered big time on deliciousness. Many watermelon-flavored beers tend to overpower you with the fruitiness, but Montauk went with the “less is more” philosophy for this one, and it paid off big time. It really might just be the perfect summer beer, whether you’re in the Hamptons or not.

While preparing it for the window sill this weekend, I reached out to the brewery via direct message on Instagram, letting them know that I had some questions about the Watermelon Session Ale (it hasn’t yet been added to the official website). I was told to email all of my questions to V (turned out to be co-founder and head of marketing Vaughan Cutillo).

Within a couple of days, I had answers to all of my questions, and now I’m going to share them with you.

What does “come as you are” mean to you guys?

VC: Come As You Are came from the atmosphere of Montauk and the overall vibe of our brewery taproom. Whoever you are, wherever you’re from, come to Montauk Brewing Company and be part of our family.

I love the simplicity of your can label art, and that it still tells a story of the beer I’m about to drink. What’s the inspiration for this style, using the shapes and colors?

VC: Happy to hear you like the simplicity! We wanted a simple, clean, nautical design for our cans. Resembling nautical flags with a color coding aspect really helped to translate the brand at the retail level. With a lot of beer options on shelves, we wanted something that stood out above the rest and I think we accomplished that.

What inspired you guys to create the Watermelon Session Ale? Is it a seasonal beer, or is the plan to have this one out full time?

VC: We brewed that beer in summer of 2016 and it was an absolute hit in the taproom. It actually outsold Montauk Summer Ale in the brewery which was pretty huge volume to begin with. This beer is all about subtle watermelon flavor. It is a filtered pale ale with slight hints of watermelon, making it a perfect beer for the summer. This will definitely be limited to the summer months, we want it to be special – a go to beer for summers in NY.

Overall, this was a lovely experience. I am really happy to see that this company, as well as others I have interacted with recently, are not too big to interact with fans. I am also grateful to Vaughan, and all of Montauk Brewing Co., for welcoming me, as I am, with open arms and open beers.