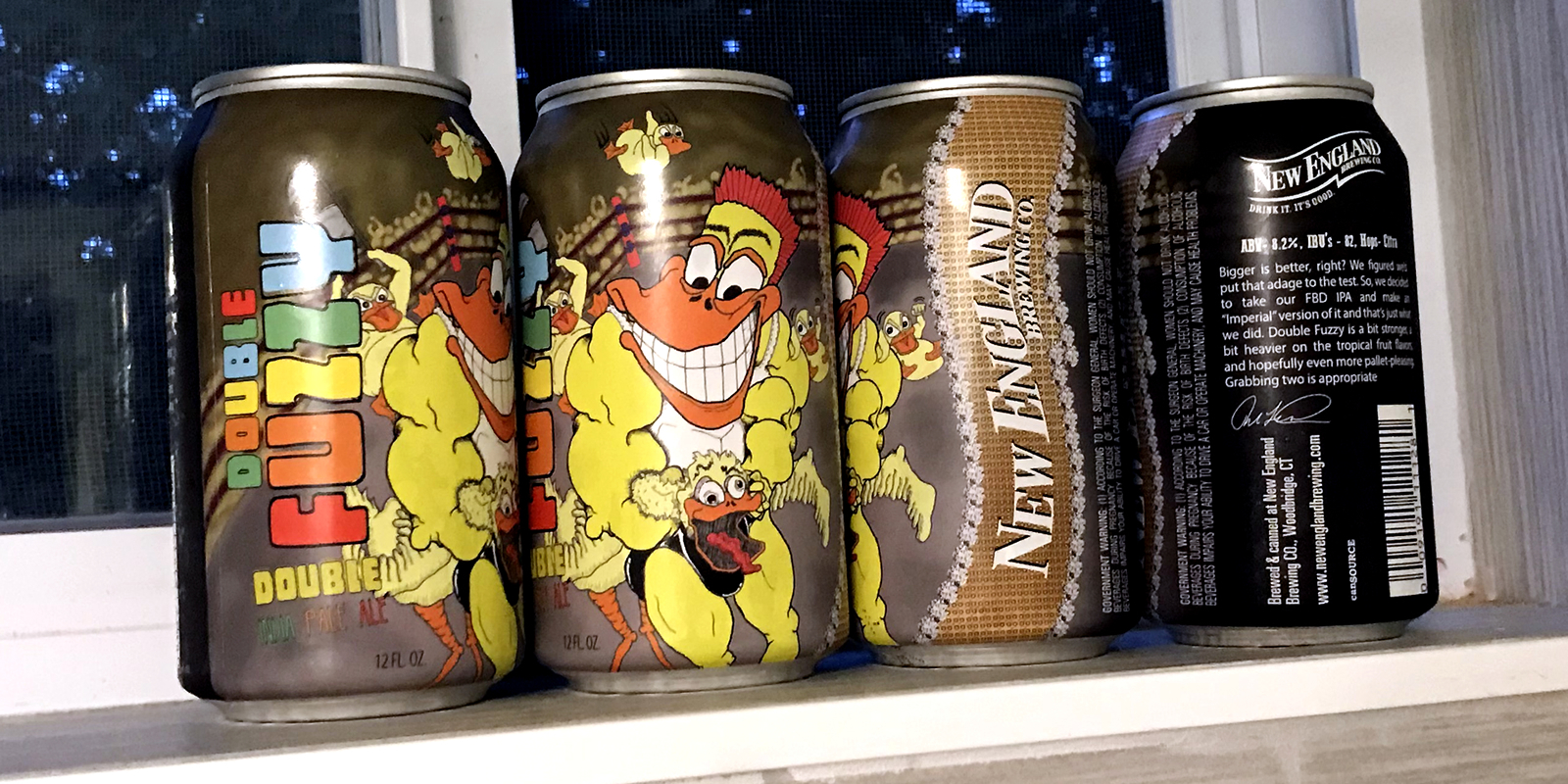 What’s up Window Sillers? A wonderful thing happened today in Connecticut: For the first time ever, one of my favorite Connecticut breweries, New England Brewing Company, released cans of their latest and greatest, most sought-after brew, the Double Fuzzy Baby Ducks. Of course, you know I had to get some in my hands… and on my window sills.

I first heard about this release from my one of the Sill’s biggest boosters, my good buddy Mike. When the rumor was confirmed by another good friend, Brewplex City’s Brian D., and double confirmed by NEBCO’s own Facebook page, I knew where I had to be on release day.

I’d never been to a NEBCO release–the only other release I’ve been to was Trillium and Other Half’s Two Hundred Trillion back in August–so I wasn’t sure what to expect, as far as waiting in line was concerned. I’d been standing for over four hours at the Yankees Wild Card Playoff game the night before, and I didn’t feel like spending all day standing in line again. I decided that arriving an hour before the NEBCO doors opened would probably give me solid shot at getting beers, but also save my legs from all that standing two days in a row.

After struggling to find parking–it was mostly my fault for not being able to find the additional parking at Grimaldi’s, an Italian restaurant behind the brewery–I parked and got in line just after 2. The line was already very long. Starting from the loading doors that held the additional release day cashiers, the line snaked around a few times, before heading around the side of the brewery, and then to a grassy area directly behind the building. That’s where my double fuzzy journey began.

Soon, two other beer lovers joined me in line. There was Chris, the electrician studying to be a paramedic that just happened to be driving by, saw the commotion and said “hey. I love beer!” And Matt, who worked for Loews and, in his Tree House Brewing Company hat, was clearly also big into beer. The three of us were alone, so we struck up a conversation to help time pass as we waited for the release to begin. Matt and Chris were both great guys, and I ended up chatting with them for over an hour. This is becoming one of my favorite things about the craft beer community. People who love craft beer, at least from my experiences so far, seem to be pretty decent folks.

As time passed, and we moved through the line, our excitement grew. We started seeing people walk by with their cases of Double Fuzzies, and we got damn near giddy. There was even a point where, for about ten minutes, we were trying to figure out if the cans we were seeing people walk by with were 12oz or 16oz. Unfortunately, despite our best efforts to convince ourselves that NEBCO was giving us 33% more beer for our buck, we finally accepted that they were the smaller, 12oz cans. No matter, 12oz is better than 0oz, right?

When the time came to finally pay for, and receive our cases, we hustled up to the registers–really just a table with four iPads on them. Chris and I ended up getting stickers, while Matt got himself the Double Fuzzy Baby Ducks official T-shirt. I was tempted to do the same, but I was already throwing down $75 for my beer and sticker, so I resisted the urge. The three of us paid for our respective cases, and regrouped just to the side of the line. Matt motioned that he was going inside, while Chris–who mentioned he was on his way somewhere when he stopped–decided he would continue his other journey. I decided to just go home, and the three of us parted ways with a handshake. Maybe I’ll see those dudes again at another release in the future, and maybe not. Maybe, it’ll just be two other cool beer-loving dudes that I meet in line next time. The craft beer community lives on.

I threw my Double Ducks into the trunk of my car (don’t worry. They were in a compartment beneath the surface, away from the sun) and started my drive home, elated to have my cans, and figuring out how many of my 16 I was going to keep for myself–8 were already promised to Brewplex Brian–and how many I would spread to my beer buddies. As any good craft beer lover knows, you have to pay it forward. Some day, you’re gonna miss a release, and a stranger will hand you three beers from the back of their truck, just because that’s what you do in the craft beer community.

When I got home, I cracked a Double Fuzzy, put it on the window sill, threw on some Tom Petty and had myself ducking good time. I hope you all got your hands on some ducks today, too. Cheers!

Check out a few more photos from my trip to NEBCO:

Check out the Double Fuzzy Baby Ducks, in all its window-silled glory, on Instagram:

New England Brewing Company: Double Fuzzy Baby Ducks – For the first time, I’m repeating a beer on the window sill. However, it’s not every day something is canned for the very first time, and your boy at BOWS gets his hands on a case, so I’m re-featuring the Double Fuzzy Baby Ducks! Whether from a can, or a growler, this is one of the best beers I have ever tasted. It’s hopped to the gills with Citra hops for a tropical, hoppy and delicious taste you won’t soon forget. Thanks to those who alerted me to this release, and to those who waited in line with me today at NEBCO. ABV: 8.2%, IBU: 82, Rotating Availability. @beeradvocate Says: 96 #beersonwindowsills #hopmendous #beerme #beerstagram #beersofinstagram #beeroftheday #brewstagram #beergeek #craftbeer #craftbeerporn #craftbeerjunkie #craftbeerlife #craftbeerlover #mybeerisbetterthanyours #whatsinyourglass #ipaguy #ipanation #ipalovers #doubleipa #dipa #newenglandbrewing #newenglandbrewingco #fuzzybabyducks #doublefuzzybabyducks #bucketlistbeers #ctbeer #drinklocal #ctbeertrail #canrelease @newenglandbrewing @canrelease