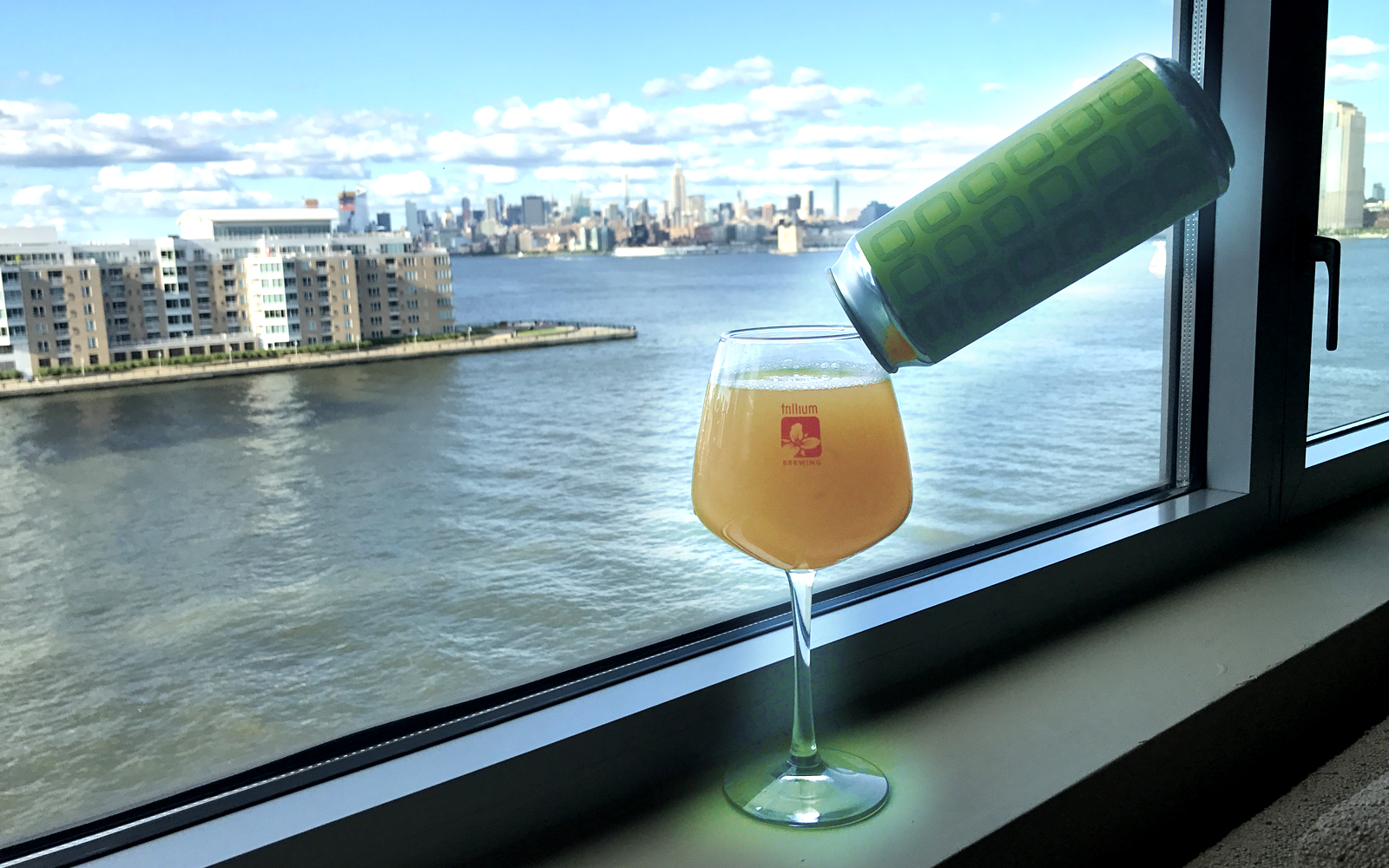 I hope you’ve all enjoyed reading about my prosperous pilgrimage to Boston’s Trillium Brewing Company. First, there was my serendipitous sojourn to Trillium’s Fort Point retail location, which ended up being only a 12-minute walk from my hotel. Next, I told you about my auspicious adventure at the Trillium Garden on the Green, which I accidentally stumbled upon while trying to get home after a rainy walk. Today, we have the final installment of the Beers on Window Sills Goes to Trillium series; the story of how I got my hands on 12 cans of Two Hundred Thousand Trillion.

When I woke up Friday morning, I knew I would have to go back to the Fort Point store before driving back to Connecticut that night. You see, the craft beer community is a very giving one. If you have a beer-loving friend or three, when you go somewhere cool, where very good beer is found, you take orders and bring back what you can. It’s just what you do. I could have peeled off some beers from the seven 4-packs I’d already purchased, but I figured… how often am I going to come here? I decided I would go back and pick up four more 4-packs to dole out to my peeps, to make sure everyone at least got a taste.

My wife, Jeannie, got up early to head to her conference events, and I was tasked with packing up the car and checking us out of the hotel by noon. Since there had been no line at the store on Wednesday, and Jeannie was going to be busy until four or five o’clock, I took my time in the morning. I woke up, showered and made several trips to the car with our luggage, pillows and beer, before checking out. I then headed to M.J. O’Connor’s, a delicious Irish pub and grill at which I’d eaten pretty much every meal that week, for one last brunch.

I sat down, ordered a “The Juice” from Peak Organics, as well as a sandwich and some fries, and got my phone out to see what updates Trillium had made to their beer offerings at the Fort Point location that morning. As I scrolled through the list, I noticed it was pretty much all the same. Then I got to a tile that looked a little different. Unlike the other tiles on the beer menu, this one wasn’t in the style of a pencil drawing. It had a bunch of zeroes on it, and was glowing and changing colors, something the other tiles never did either.

I nearly spit out my food when I clicked on the tile and saw what it was. Two Hundred Thousand Trillion, a double IPA aged on peach, apricot and guava. It was a one-time release of a collaboration between Trillium and Other Half Brewing Company–one of the more respected new craft breweries in Brooklyn (they recently did a special beer release with Carson Daly that garnered much national attention). Seriously? My afterthought trip to pick up a few more 4-packs for friends was now going to nab me an exclusive release from two of the most sought-after breweries in the north east? Had Jeannie slipped a rabbit’s foot in my pocket before we drove up to Boston? Holy IPA, Batman!

My first instinct was to run out of M.J. O’Connor’s screaming, and sprint the half mile to the Trillium store immediately. However, I still had my full meal to eat, and I didn’t want Jeannie to get called out of her conference session to pick up her raving husband from the hotel security office. “He keeps yelling nonsense about trillions and thousands… and guava,” I could picture them saying to my shocked wife. “You better come and get him, ma’am. And don’t come back to this conference next year.”

I took a breath and settled down a bit. After all, there’d been absolutely no line to get into the shop two days ago, and it was still relatively early in the day. How many people would be actively searching the site for an exclusive can release on an early Friday afternoon? Not everyone was on vacation, like me. Surely, there’d be plenty of beer left by the time I got there. People had jobs. And kids and what not! Sufficiently convinced that everything would be OK, I finished up my lunch, albeit a little faster than normal, downed my “Juice,” paid my bill and grabbed my trusty cooler backpack from the car, which was still in the hotel garage.

I started walking. As I got closer to the brewery, my excitement turned to dread. I could see people lined up around the corner from the store. I’d never been to a can release before. How many cans would even be available? As people came out of the store and back around on their way out with packs and packs of frosty looking cans, all of which seemed had that same colorful label with all the zeroes all over it, I started to sweat. Why had I stayed to finish my food? Why hadn’t I just run out of there? Jeannie would get over the embarrassment of dragging me out of jail for a dine and ditch. If worst came to worst, she could find another conference to go to, too! Ugh!

Suddenly, as I was about to go into a full panic, the loading dock door on the side of the building slid open, and Trillium workers poured out. They asked us to back up, and away from the loading dock, and a truck backed in and up to the open dock from the street. Two bearded gentlemen got out of the truck, opened up the back and began unloading an entire pallet of cases of Two Hundred Thousand Trillion into the gaping door of the brewery. There must have been hundreds of cans on it. Phew! As the crew unloaded it into the brewery, they joked with some of their in-line buddies, offering a 4-pack for $500. Lady luck, it seemed, was still with me. She had brought me this far, and she wasn’t about to shut me out of the ultimate prize now.

Once the beers were loaded into the brewery, and the truck had gone, the line started moving again. I quickly made it around the corner, and then to the store entrance. Soon enough, I was inside ordering my beers. Although I really only needed one 4-pack of these to take home, I realized that the craft gods were smiling upon me, and it was my duty to pay it forward. I bought the limit, which was three 4-packs. I would keep one for myself, and distribute the other two among my friends.

After monies were exchanged, and the treasure was mine to keep (I threw in another 4-pack of the Dialed In with Pinot Gris Juice, too), I loaded up my cooler backpack and headed back to the hotel. Unfortunately, I didn’t have a room to go drink a beer in, so I had to sit in the lobby, with a bag full of ice cold exclusive beers, for three hours until Jeannie was done.

When Jeannie finished up, we headed straight for Connecticut–a four hour journey in mostly rush hour traffic. When I got home, I realized I was still a little hungover from my second trip to the Garden on the Green the night before, so I didn’t want to tarnish the experience by tasting the beer right then and there. Plus, even if I loved it, I didn’t really feel like drinking 16 oz of any kind of beer, at all.

The next day, we got up early and drove to New Jersey for my friend Angela’s wedding. After the amazing church ceremony (I’m not crying, you’re crying!), we headed back to the hotel to rest up for the reception. I had my glass and a fresh can ready to go. Unfortunately, our room wasn’t as ready as I was. Instead of drinking my Two Hundred Thousand Trillion, I had a local IPA at the bar and met up with some other friends who were at the hotel for the wedding.

Finally, about 30 minutes before the reception, we got the call that our room was ready. We were already dressed, so Jeannie took a quick power nap while I got my precious ready to drink. After popping the can, pouring it into my long-stemmed glass and photographing it with the part of the Manhattan skyline in the background (our hotel was on the Jersey side of the Hudson), I took my first sip.

My god, was this beer fresh and flavorful! The Galaxy, Citra, El Dorado and Nelson Sauvin hops gave it a solid tropical nose and taste, and all the guava, apricot and peaches really helped to balance those hops in the taste. The dry finish left me begging for another sip, and it seemed that every one was as good as the last. It was definitely worth the agonizing wait.

After the last satisfying sip, I woke Jeannie up, took one last look in the mirror and we headed upstairs to party the night away. It was the perfect way to cap off one of the best, and luckiest, beer weeks of my life.

Thank you, Trillium, and congratulations to the new couple: Angela and Simone Celio!

Trillium Brewing Company and Other Half Brewing: Two Hundred Thousand Trillion – Sometimes, the window sill just gets lucky. Although it has only been around since 2013, Boston’s Trillium is among one of the most revered breweries in the northeast. Beers like Two Hundred Thousand Trillion, a double IPA aged on peach, apricot and guava, are why Trillium has gained such a following. I also have to give credit to Brooklyn’s Other Half Brewing, who collaborated with Trillium on this delicious wonder. Other Half has also recently become a pretty big name in the New York beer scene. If this collaboration sounds familiar, it’s because the two breweries have combined two other times for IPAs: Hundred Thousand Trillion, and Like Woah. This brew is juicy and hazy, like any good IPA should be, and the flavors from the Galaxy, Citra, El Dorado and Nelson Sauvin hops really shine through, along with the fruit. It was also canned one day before this review, so the freshness was amazing. The best part about this beer? I was in Boston for the week, and I needed to stop by Trillium’s Fort Point location to bring back beers for some friends. As it turned out, I stumbled upon this release. Sometimes it just pays to be lucky. Check out New York City from my Jersey hotel room, too. Lots of traveling this week! ABV: 8.0%, IBU: N/A. Beer Advocate says: N/A (It’s too new!) #beersonwindowsills #hopmendous #beer #beerme #beerstagram #beersofinstagram #beeroftheday #brewstagram #beergeek #craftbeer #craftbeerporn #craftbeerjunkie #craftbeerlife #craftbeerlover #mybeerisbetterthanyours #whatsinyourglass #trillium #trilliumbrewing #mabeer #boston #bostonbeer #fortpoint #timetogetdrunk #trilliumonthesill #twohundredthousandtrillion #otherhalf #otherhalfnyc #collaborationbeer #canrelease #nyc @otherhalfnyc @trilliumbrewing